We went on a quest for a lampshade yesterday. Our Neighbors gave us a ride to the Mega. Mega had none. We walked to Wal-Mart. None there either. Trying to walk all the way to Chederaui was futile. We ended up at a restaurant on Avenida Juarez having lunch. 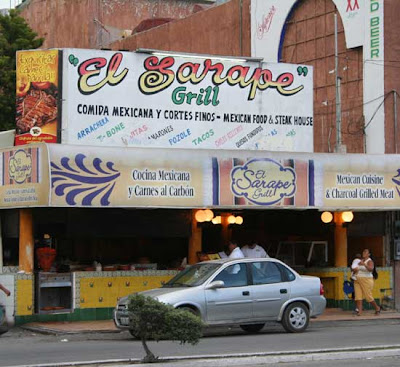 The circus is in town. We were eating our lunch at El Sarape on Juarez. A clapped out, faded, rusty circus vehicle drove past us out on the street. It was a small flatbed truck with a cage on the back. Closer inspection revealed a pair of gigantic scruffy tigers lying on their sides napping down the main street of town like nothing. I shouted "Tigre!" and bolted to my feet for a better view. The mexican customers and the waiters went on full alert. 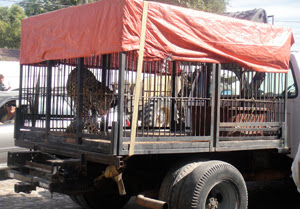 But they didn't look toward the street where I was pointing but rather started checking back towards the banos and under the tables. Like maybe a 500 pound tiger had somehow slipped into the restaurant unnoticed by the guys out front and was lurking in wait for somebody to take a leak. I repeated "Tigre, Tigre, mire!" waving my arm towards the open wall of the restaurant and the street. Two waiters saw the truck and repeated "Tigre, circus." to the other waiters, busboys and cooks to calm them and confirm I was not a total lunatic and that it was still okay to go pee. Few minutes later very nasty looking Hispanic half clown walked by. This guy was wearing big, chartreuse clown shoes which sort of flashed as he heel-toed down the 2 foot wide park strip they use for a median barrier and the standard horizontal striped shirt, high waisted pants with suspenders. His only other concession to clowndom was his hair. He had two bleached out yellow pig-tails up on the top of his head. It gave the appearance of a demented big shoe human with giraffe fuzz horns. The rest of his hair was either short or slicked down. 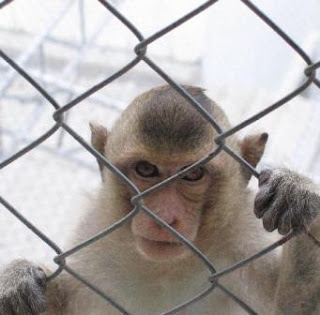 Toward the end of our meal another circus truck rolled by. This one was filled with long tailed monkeys about the size of fifth graders. These were particularly nasty little bastards. One glance revealed they were hardened by years of imprisonment and looking to extract revenge on our species.   A few of them were scowling and reaching out though the cage frantically scrabbling clawing the air trying to reach the people on the street while the others were frantically searching the floor of their mobile monkey cell for a previously undiscovered piece of excrement to hurl at an unsuspecting pedestrian as the cage rolled by on the street. I refrained from any outburst but did alert P. Of course she cried out "Monkey!" at the sight of this freshly visible reeking atrocity. Her outburst prompted another sudden search of the premises for any wayward monkey that might have been under the tables, hanging from the rafters beneath the thatched roof, hiding behind a counter or of course, hunkered down near the bathrooms.

We had a nice lunch and forgot all about the lampshade. 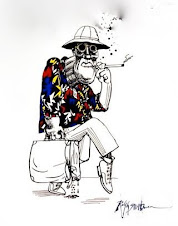